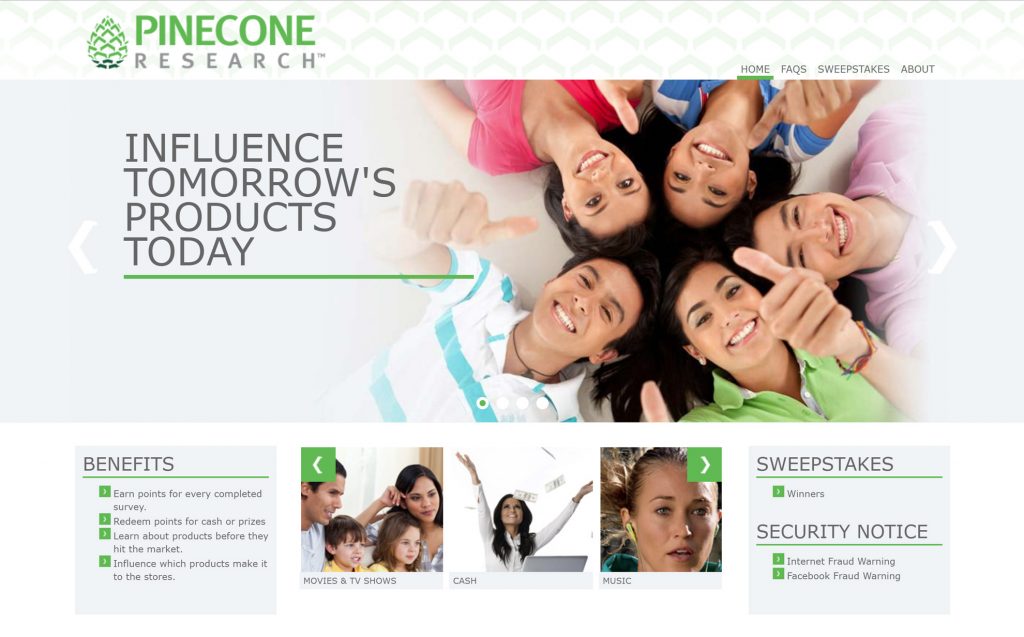 Pinecone Research is not like any other paid survey company out there.  The main difference, among a few others, is that they are highly exclusive.

Most often they announce that they are accepting new panelist through banners, ads, and links on partner blog sites. Every opening isn’t for everyone either.

While sometimes they do offer open registration, it is not uncommon to see that they are accepting only a certain gender or age range.

What is Pinecone Research

Pinecone Research is a market research company that has been around for 19 years.  This means, if you think back, they have been around almost as long as the internet has been available to the general public.

They are owned by The Nielsen Company.  This is same group that puts out the Neilson ratings.

You know, those little black boxes that people used to put on their televisions to track their watching habits?

This means they go back much further than 19 years actually, and the older a survey company is, the better.

As previously mentioned, it has long been the case that to sign up you had to wait for Pinecone Research to post their banner announcing that they were accepting sign-ups.

Recently there was some discussion on the world wide web that was no longer the case, but according to the FAQ’s on their website, it is.

“Presently, we do not recruit new members through our website or take unsolicited referrals. However, we will be posting recruitment opportunities through banner ads on various unsolicited websites from time to time throughout the year. If you see one of these ads, please feel free to sign up with us.”

There is a link to a sign-up page floating around out there, and it will allow you to enter your information. You can find it here.

However, as they are not actively recruiting at this time, you will get a message to that effect.

If you are afraid you will miss the banner, you can keep trying that link.  You may catch them when they are accepting new panelists.

They will also will let current members know when they are open and give them a link to use when inviting friends and family to join.

If you have a favorite blogger that is a member, stalk their blog and social media for an announcement.

It is not uncommon for them to open registration only to those who meet certain demographic criteria such as gender or age range requirements.

From what I can gather, much has changed since I worked with Pinecone years ago.  One thing that appears to have remained the same is that they send surveys via email rather than posting available surveys on your account.

One reason for this is that they prequalify you for each survey they send.  That means that you almost never have to worry about screening out.

If they send you a survey, you are going to be able to complete it, and you will get paid.

Most surveys take 10 to 15 minutes, they send shorter ones.  These are typically uncompensated profile type surveys that help them determine your qualification to complete future surveys.

Do not be tempted to ignore these since they are not paid.  Taking them increases your standing with the company greatly, which can result in additional opportunities and pay.

They have always been known to take care of loyal panelists.

When I worked for them, I received about 2 surveys per week.  It seems that this is still the case.

Most often these opportunities go first to those panelists that answer every survey, even the uncompensated profile questionnaires, so stick it out if you are interested in product testing.

These projects are not as common as surveys, but they do happen and are generally worth it.

Surveys generally pay $3 each, which is a major reason for the stellar reputation Pinecone has among survey sites.  This is pretty great comparatively speaking.

Though they changed their business model recently and now use a points system, 100 points equals $1, and surveys are worth 300 points each.

There is also no minimum balance requirement to cash out.  You can cash out as often as every survey.

You can choose to receive cash via check or PayPal, or I hear there are gift card and product redemption options now as well.

The first payout is a $3 check regardless.  After than you can choose your payout method.

Their Take on Surveys

Another difference between Pinecone and other surveys is their policy on survey taking.  While most survey sites have no minimum survey requirement and allow you to simply log on and take surveys at leisure, Pinecone takes a different approach.

If you are sent a survey by Pinecone, the expect you to take it.  If you are going out of town or are not going to be able to take surveys for a period of time, you can let them know, and they will not send you any during that time.

If they send you surveys and you continually do not complete them or do not take more than you do take, you are in danger of being dismissed as per their terms and conditions.

I was asked if I was still interested in receiving surveys and issues a “warning” of sorts before I was terminated.  I just told them I could no longer guarantee I had the time to complete every survey, and we parted ways cordially.

There is some chatter lately that Pinecone Research is having issues.  In recent months there have been some complaints on the BBB website.

The result has been an F rating with the Better Business Bureau.  I skimmed through the complaints, and most are related to payment issues, which is concerning as they have long been considered one of the most reliable survey sites

The most concerning part is that the responses to these complaints were automated, and there is no indication that they have been resolved.

So, does Pinecone Research pay?  They always have.  They are too well established and too great of a reputation for that to be changing substantially overnight.

Is Pinecone Research Legit or a Scam?

They aren’t a scam.  You need to know this though.  Because they have such a great reputation, there have been many scammers that have used their name in an effort to trick others.

Most recently there has been a scam where a company calling themselves simply “Pinecone” scammed some people out of hundreds of dollars.

They were sent a check that was to include their pay and an amount of money for some supposed task, and when the amount was deposited the check was, of course, fake.

This wasn’t discovered until the money had already left the victim’s account.

This situation is easy enough to avoid.  First, be certain you are working with the legit Pinecone Research.  They will not send you a large check and ask you to deposit it.

Remember, if it seems too good to be true, it probably is.  If you are uncertain, always double check, do your due diligence, and don’t take any chances.

They have been around too long to simply disappear overnight.  The complaints are very, very recent.  I feel like there is a simple explanation and that the issue is being dealt with.

Though there are several complaints, the number is minuscule compared to the number of panelists they have.

It doesn’t appear that this is a long-term issue, but rather the result of a technical glitch that they are working to correct.

If you get the opportunity to sign up, you definitely should.  You will not get rich, but you will waste less time than with other sites and be compensated fairly for your time.

I do not see them opening registration until they have whatever is going on worked out, when you see that banner, jump on it.

8 Survey Panels That Pay You with Checks by Mail