×
Home > survey-reviews > Survey Club Review: Should You Join the Club?

Survey Club Review: Should You Join the Club? 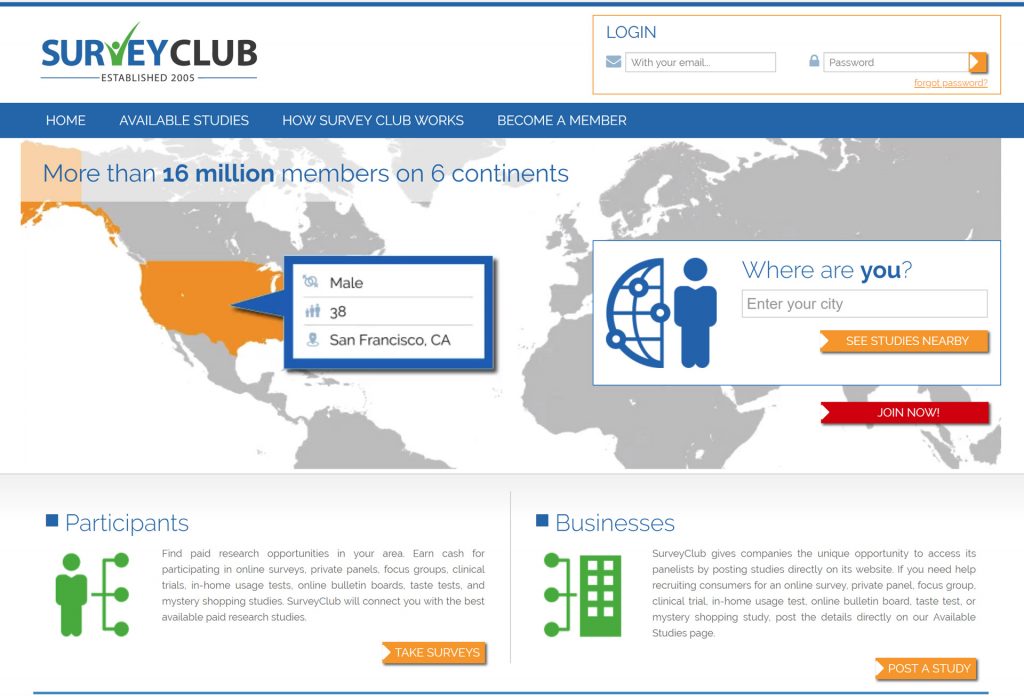 Taking surveys for money has always been an alluring idea.  Who doesn’t want to make a few bucks for spending just a few minutes answering questions?

The internet caused this industry to explode, along with the idea that there was serious money to be made here.

However, with the internet came a slew of paid survey scams as well.  How do you know which sites are for real and which ones to stay away from?  Which category does Survey Club fall in to?

Survey Club has a little more to it than what it seems at first glance.  At first, I thought it was another go-between site that connects you with other survey sites.   This was because as soon as I signed up, I was presented with a list of survey site recommendations.

Now, if you are not already active on these types of sites, there is some benefit to this. They claim to have screened each site they recommend, which helps to weed out the bad eggs you are sure to come across if you go it on your own.

However, I did some research and found that they actually offer more than just a middleman service.

What Does Survey Club Offer?

In addition to screening and recommending survey sites, they also offer their own surveys, panel discussions, and product testing opportunities.

The best difference I saw between Survey Club and other survey sites was that their list can be filtered.  You can search by the type of project you are interested in and even for those specifically being offered in your area.

I tried to filter by “taste test” and got three hits.  I didn’t qualify for anything, but it was really cool to see what was available based on what I was interested in without having to search through the whole list

This process was a little tricky for me.  It said that I had already signed with the standard email address I use for survey sites, so I tried a password reset.

After waiting several days, and trying a few times, I never got the email to reset.  It wasn’t even in my spam folder.

In the end, I had to sign up with a different email address to complete my research.  This is a huge faux pas with survey sites, as you are usually not allowed to have more than one account.

This may come back to bite me eventually, especially if I try to cash out a large amount.

I am hoping they will be understanding of the fact that I tried and see that my other account has no activity during the time I have been active on the new account.

Time will tell I guess.  If time had not been of the essence, I may would have gone another route.  Contacting customer service may turn out to be the better solution.

When you first get signed up, you get that list of suggested survey sites I mentioned.  They want you to sign up for a least three to get the maximum benefit, but I skipped this part.

I am already of member of most of the sites they recommended.

I went straight to the survey link.  I had to answer a few more profile questions, but then I was given a 6-minute survey.

I wasn’t told how much it would pay, but I gave it a shot.  Six minutes is a pretty short survey.

Honestly, this was one of the most fun surveys I have ever taken.  It was interesting and engaging, and I was awarded 50 cents for doing it.

Next, I got a message that I could take three general opinion surveys per day. There was a link, so I followed it.

It took me to a list of surveys.  Some said “general opinion,” while others said “customer opinion.”

Other survey types included habit surveys, market research surveys, and regional surveys.  There were links to surveys from other sites also.

Most of the surveys took between 5 and 20 minutes and paid between $.50 and $5.  When I clicked on a consumer survey, I got one that was estimated to take 15 minutes, but it again did not tell me how much it would pay.

In the end, it took a little less than 15 minutes but only paid $1. The end result was that I made a $1.50 in a half hour.  A regular job paying $3 an hour is not considered that great.

That is why, for the most part, you have to consider any pay you get from surveys to be extra money, not necessarily to make a living.

The simple set up of the Survey Club rewards program is refreshing.  You have 3 options for cashing out:  PayPal payout, a check, or an Amazon gift card.

It is important to remember that if you follow a link to a survey through another site, your credit will be on that site.

You will not be rewarded through Survey Club for surveys taken on other sites.

The referral program isn’t the best I have ever seen, however in light of the fact that not all of these sites have this type of opportunity, it is better than nothing.

You receive $1 for each person that signs up through your referral link, but it is capped at $5.

One of the most fascinating things about Survey Club is that they work to connect you with opportunities that are specific to the area of the world you live in.

This means that you may get a phone call at some point with an offer to participate in a live opinion panel, test products, or take advantage of another type of paid marketing opportunity.

I cannot attest to this personally, but I can find no evidence that they do not hold true to this claim.  Good luck!

Is Survey Club Legit or a Scam?

It’s not a scam.  They don’t ask for payment or credit card information, and there are few complaints that they don’t pay.

Those that are out there typically stem from unrealistic expectations.

This one is on the line.  If you are new, the recommendations for other sites to join could be extremely useful. Otherwise, those are a moot point.

You can still benefit though, even if you are already signed up for most of the sites recommended. They don’t have the lowest payout threshold or the highest payouts per survey, but you do actually get the money you earn, which is the whole point.

Not knowing how much a survey pays before you take it isn’t great, but it may be worth the risk if you don’t have any higher paying surveys out there on another site.

The possibility of connecting with opportunities in your area definitely sets this one apart.

If you like this one, we also recommend SurveyJunkie and Toluna.

Hungry? Here’s How to Take Online Surveys for Free Food!

How to Make 30 Dollars Fast: Try This Super Simple Method!

17 Amazon Review Sites: Get Free and Discounted Products on Amazon