×
Home > survey-reviews > Panda Research Review: Is it All Black and White?

Panda Research Review: Is it All Black and White? 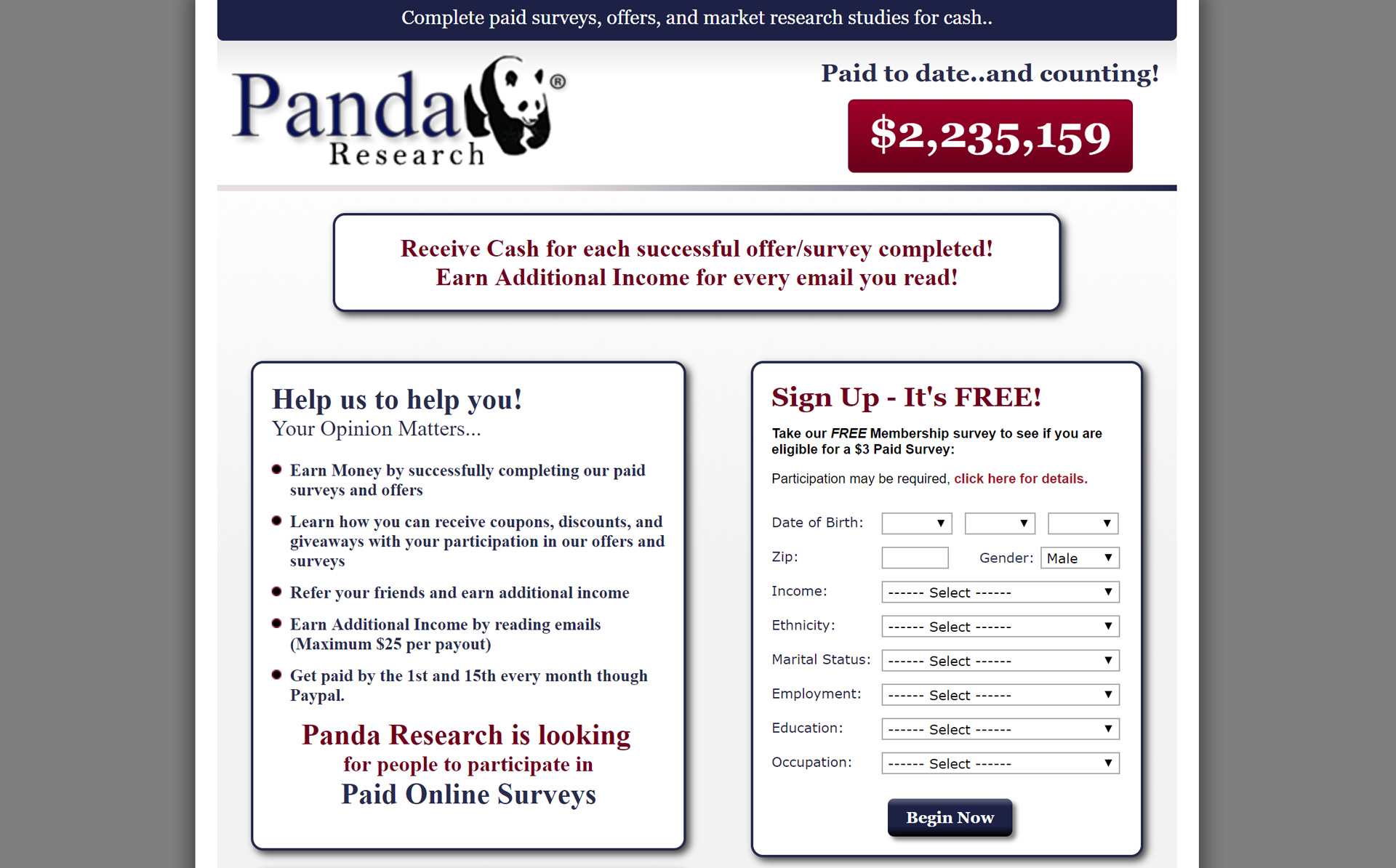 Panda research has been around since 2005.  The parent company, A&A Marketing, has a B- rating with the BBB.  They are not accredited.

The B- was intriguing to me, as it is not that bad as far as survey companies go. It peaked my curiosity for sure.

What is Panda Research?

Panda research is the original product of A&A Marketing.  Since it’s launch, they have initiated other paid survey sites, but this one is the oldest and receives the most recognition.

The site connects users with offers and surveys that they can receive a monetary incentive for completing.

I spent some time on the site, and at first glance, it looked pretty good.  There were several high paying offers that are almost unheard of in the paid survey world.  Tasks and surveys that would take 10 minutes or less paid up to $40 or more!

The site was well laid out, easy to understand, and user-friendly. I did not have to search for the terms, privacy policy, or FAQs.  They were easily accessible.

The FAQs were complete and thorough.  Every question I had was answered there, and as I read, I suspected any complaints came from those who did not do the same.

I got into the nitty-gritty and tried to figure out what all the fuss was about. My first step was checking out these amazing offers and surveys.

I had a ton available as soon as I joined.  The list was much longer than what is first available on other sites.  Since the sign-up process was quick, and there were very few profile questions, I had my doubts about most of them.

See, no one loves answering a ton of profile questions even when there is a sign-up bonus.  The truth is though, they really pay off in the long run because the information you give cuts down on the possibility you will waste time on surveys you are not qualified to complete.

Since Panda Research asked very few of these and gives a $3 sign up bonus, I was suspicious of the large number of available surveys and offers.

My suspicions were confirmed with the first click. I tried to take a 10-minute survey that paid $42.  It was for people with diabetes.

Now, the good thing is that I was told this before I started the survey, but it was still disappointing.  I tried another survey with a similar time estimate and pay.  It turns out it was for people with asthma, and they wanted people to test asthma treatment.

While I am impressed that Panda Research offers these types of studies, if they spent more time screening and building profiles on the front end, fewer users would be disappointed with the offers that were available to them.

As it turns out, I was only eligible for the lower paying offers, most of which were under $1.  They were significantly faster than what I used to though, so I did give a couple a shot.  One paid $1.50 for 5 minutes.  That is actually really good in the survey world.

All I had to do was sign up for another survey panel and then answer a survey about the process.

I did that, and my account was credited.  It was noted that it would not be available until the survey company confirmed my sign up.

As it turns out, that last one I did was actually considered an offer even though it had a survey connected with it.  This is because I had to complete a task that was to be verified by a third-party before I could be paid for it.

The surveys and offers are included on the same list and hard to distinguish between.  I am not a fan of that.

The problem with offers is that you typically have to give up credit card information, or sometimes payment, to complete them. Even if you are not charged on the front end, sometimes it is a product or service that must be canceled, and if you fail to cancel, you are charged at a later date.

That is not to say that offers cannot be profitable, but they can be risky.

There were offers that did not require money or payment information, but they paid less than $1 each.

You can sign up family and friends and make money.  For each person that signs up at your referral link, you will earn 10% of what they earn from offers for life.  This means that if they cash out $50, and $30 of those are from offers, you will be credited with $3 once they are paid.

They pay out exclusively through PayPal.

They have quite the song and dance you must go through before getting paid, and I suspect this is where most of the complaints stem from.  I doubt many users read far enough in the terms or FAQs to recognize these policies.

First, when you are verified and able to cash out, you will be able to access the “get paid” link. Once you do this, a pop-up window will appear with a phone number you must call to verify your request.

I suspect many people simply close this and dismiss it as an add without really paying attention.  They may never realize it is a step that must be taken before they can get paid. It is not a common practice, but Panda says it helps them cut down on fraud.  It probably helps them cut down on having to pay people too.

The other weird thing is that they require a 30-day waiting period after payment request.  After that window, you will receive payment on the 1st or the 15th of the month, whichever comes first after the 30 days.

A month waiting period is a little ridiculous and again, not common practice.  This probably leads to confusion as well, as you could end up waiting 6 weeks or more for payment after the initial request.

Back to that B- rating with the BBB.  Ratings are composed of many things, one of which is how many complaints there are and how effectively and quickly the company responds to them.

A&A Marketing has 36 complaints against it, which in the course of 14 years in business isn’t really that bad.  Not all of them are related to Panda Research, but I think it gives a good picture of how the business is run all the same.

Most of them are related to not getting paid.  The company responded almost every time that the user had either failed to call and verify, they were in the waiting period, or they had not met all the terms as laid out in the policies on the website.

Most were not satisfied as they wanted their money, though the response was the proper one, which led to a rating that was less than A+.

Is Panda Research Legit or Scam?

They are probably not really a scam, in the sense that a scam is a trick to get money out of you.

The site is free to sign up and use, and the only time you may spend money is in relation to an offer, which Panda Research does not receive.

As far a company that has legit surveys and offers for you to take part in, I think they are real.

While on the surface they look pretty great, I have some serious misgivings about this company.  The first is the lack of profile information gathered.  It seems kind of tricky to show you all the surveys when they haven’t even really tried to match you with those you are most likely to be able to complete. You could end up wasting a lot of time trying to find those you are eligible for.

The second is this.  Once you sign up for something or complete an offer, you are presented with a list of offers or yes or no questions.  These have no effect on your payment at all, but if you mark them, you could end up with a lot of spam.

The worse case of this is after you verify your email address. Once you click through, they ask you if you would like to receive certain types of email.  Everyone is already marked yes, it is easy to zoom through and end up being bombarded with all kinds of email.

Another thing that may sound silly, but in my eyes is a big deal, is a glaring spelling error. This one pops up after registration.  It is telling you that you “now” have to follow these three simple steps to get your $3 sign up bonus, but what it really says is “No, just follow these 3 simple steps…”

It is an easy enough mistake, but very unprofessional.  A company that has been around as long as these guys should not have errors on the page.

My last issue is that song and dance routine required to cash out.  Not only is $50 really high and hard to reach, but a phone call and 30-day waiting period each time is a little much.  It looks like they are trying to delay payment for as long as possible, though there are obviously those that do get paid.

My conclusion, based on all of these issues, is that this is one that you can pass on.  If you really want to take surveys and make money while doing it, check out SurveyJunkie or Swagbucks.

How to Make 30 Dollars Fast: Try This Super Simple Method!