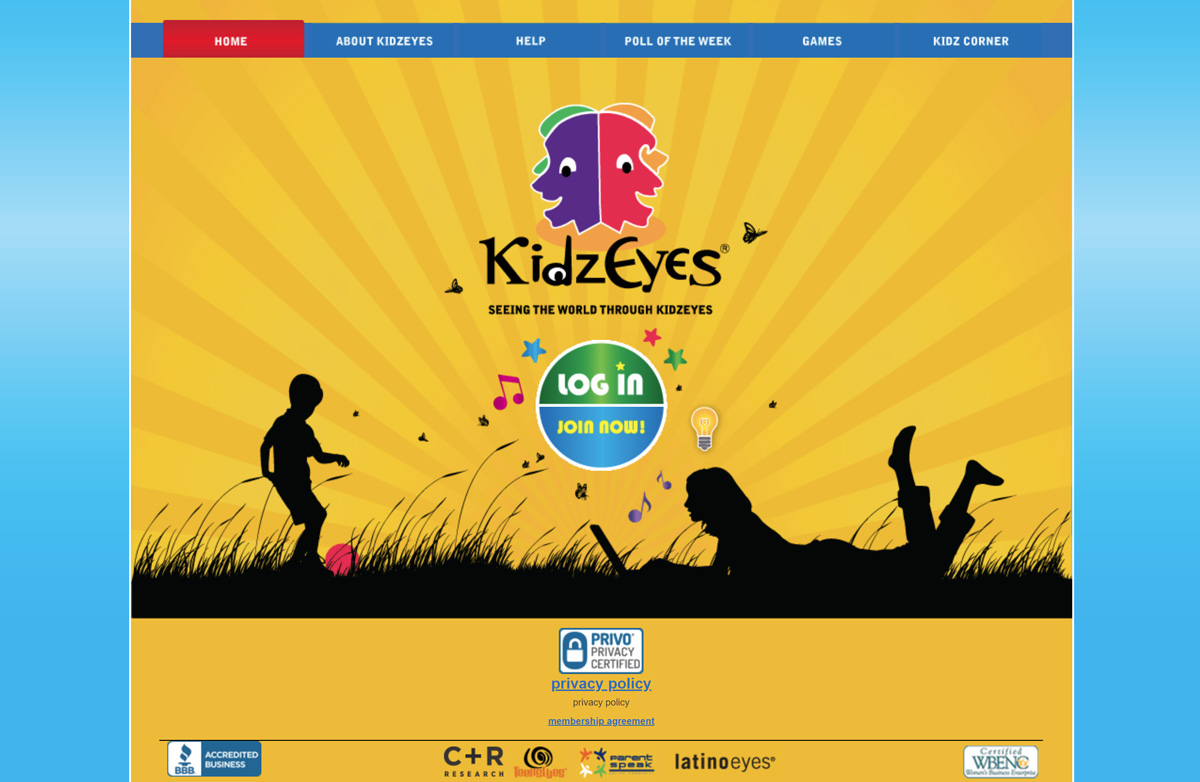 Have you ever thought about trying to find a kid survey for money?  This one may be for you then.

KidsEyes is run by C+R Research.  C+R has been around for 58 years and is based in Chicago.  While KidzEyes doesn’t have a BBB profile of its own, C+R does.

They are BBB accredited, and they have an A+ rating.  There have only been 6 complaints against them with the BBB in the past 3 years.

The majority of these were addressed and handled by the company in a satisfactory manner.  Those that are not closed are likely still open because the one complaining did not close it.  Since all but two were successfully closed, it is likely that the resolution was simply not reported.

Although this is a site geared specifically toward kids, the parents are the ones who must sign up.  This is because during the sign-up process the parent gives permission for the child to use the site.

To be signed up, children must be between the ages of 6 and 12, and they must live in the United States.

Parents are asked for their own birthday, address and other profile information, as well as that of any other head of household.

This is in an effort to build a panel profile for the child, so they can determine which surveys they will be the best fit for.

This is always a big deal, but when children are involved, it is even more important.  KidzEyes is completely compliant with COPPA (Children’s Online Privacy and Protection Act.)

To stay compliant, they must verify that the person signing the child up is actually the legal parent or guardian.  They do this by using a product called Childguard.

During the sign-up process, they explain this to you, telling why they are asking for certain information such as the last four digits of your social, and offer a link to the Childguard website so that you can see for yourself what it is are all about.

They say that once you are signed up, you will receive your first survey invitation by email in one to two weeks.  According to them, they send one or two invitations per month, and you can also check your account to see if you have any surveys available.

Surveys run for varying lengths of time, and the pay varies just as much. You may earn $2 or $20, and you may spend 5 minutes or an hour on a survey.

Surveys are said to be fun, and sometimes you get to learn about new products.  Survey topics include but are not limited to food, clothing, toys, games, television shows, music, technology, the environment, and school.

Each survey is worth a certain amount of KidzPoints.  Each point is worth one cent.

When you sign up, you automatically get 500 KidzPoints, or $5.  The minimum balance to cash out is $10, so they get you halfway toward cashing out the first time quickly.

How many surveys you get and how much you make depends on a lot of variables like how many surveys are available, what type of panelist the company putting out the survey is looking for, and more.

When you get ready to redeem your points, you can request a check or a PayPal deposit.

What Else Is There?

Though there are no other ways to make money offered on the KidzEyes site, there are plenty of reasons to hang out there even when you don’t have surveys available.

There is a games section with offers 6 different games to play.  These include:

There seems to be a large enough variety that there is something to appeal to those across the 6 to 12 age range and girls and boys alike.

That ghost game would be great for helping older kids learn how to type.  It was really fun! The ghosts have words on them, and you have to type the words to destroy the ghost before it is too late.

The only other game I tried was the Free Kick game, where you have to kick the soccer ball into the goal.  It was an effective, entertaining way to kill time as well.  Kids will love this section I think.

This is a neat little section.  They say that they used to run a print newsletter and include submissions such as artwork, poems, and recipes from members.

Then they decided it was more effective to publish those things online, and thus the Kidz Corner was created.

It includes the following:

As you can see, this section could use some updated, but it was still a fun read the first time.  Maybe they aren’t getting a lot of submissions?

Is KidzEyes Legit or a Scam?

This isn’t a scam.  You don’t get this type of standing with the Better Business Bureau by running scams.  They never ask for money or even credit card information.

There are no offers that would ask for this, and there is no way your child could accidentally purchase something.

From all accounts, they pay as promised when requested and all terms are met.

The is a good site for kids to play around, have some fun, and maybe make some money. It isn’t going to make anyone rich, and if you don’t have children, there is nothing here for you.

If you do have kids between the ages of 6 to 12 and you think they will enjoy this, sign them up.  Just warn them it won’t be fast money.

They will only get one or two surveys a month, and they won’t get the first one for up to a couple of weeks after you sign them up.

Most kids will be impatient and then forget about it.  That is probably the biggest drawback.  It may be hard to keep them excited about it.

If they are willing to take the surveys when they come through, it could be a nice surprise when they are able to cash out.

If you are looking for surveys for yourself, try SurveyJunkie and Toluna.

These offer plenty of ways to get paid, increased chances of earning, and they pay as promised.

Online Paid Surveys for Teens: What They Are and How to Find Them